T.A. Field Estates Pty Limited is a large-scale family owned agricultural business running rural properties in NSW with a Head Office in Sydney. The company is currently run by the 4th Generation member of the family, Michael Field, with the next generation also starting to enter the business.

Currently the business produces over 2,400 bales of wool ranging from 13.8 – 30.0 microns, 2,100 mixed age breeding cows and over 10,000 tonnes of grain including Wheat, Chick Peas, Barley, Triticale and Sorghum are grown.

Maps were disabled by the visitor on this site. Click to open the map in a new window.

The company has evolved over many generations

The Field family have been involved in the pastoral, livestock and meat business continuously since 1885 when Mr Tom Field (Michael Field’s great grandfather) first migrated to Australia. Mr Field was originally involved with the butchery trade in England prior to emigrating to Australia and was forced to move to Australia at this time due to livestock disease outbreaks in his homeland. Mr Field started out trading as a butcher and was involved in the live export of cattle and sheep to the United Kingdom and had moved into wholesale carcass butchering. Tom Field’s son T.A. Field ΙΙ took over the family business in 1900 and, with his younger brother Herbert, expanded into grazing.

In 1906 they acquired their first property, Tooloom near Grafton. This was the commencement of the pastoral company now known as T.A. Field Estates Pty Limited.

In 1908 Gordon Brook was purchased, a property of about 23,000 acres near Grafton, and eventually a Hereford stud was commenced under the control of Sydney John Field and his wife Bubbles.

In 1912 the Fields formed a partnership with the Vickery family (until 1936) to purchase Willandra, a merino stud of considerable repute near Hillston, Western NSW. Pastoral acquisitions continued, notably Hunthawang in 1922 and Congi Station in 1928. Hunthawang was sold in 2010. Numerous stations have been purchased and sold throughout the last 100 years, such as Blue Nobby, Oban, Goree, Clifford Downs, Yamma, Belalie, Burrawang, Standbye, Brewon, Lanyon and many others.

In 1930 the 10,000 acre property Lanyon, a country estate on the banks of the Murrumbidgee near Tharwa, in the ACT was purchased. This property was resumed by the Federal Government in 1974 after a protracted legal battle.

By 1931 T.A. Field Limited had become a meat and pastoral empire, headquartered in Thomas Street, Sydney.

By 1948 the Field family had interest in abattoir operations and by the early 1950s they had expanded into retail butcher shops trading under the name “Springfield Meats” in New South Wales and “Morfield” in Queensland.

In 1962 T.A. Field Holdings was listed on the stock exchange, with 60% of the shares retained by the Field family and 40% issued to the public via a float.

In June 1977 AMATIL (a package food, cigarettes, and soft drink conglomerate; now known as Coca-Cola AMATIL) successfully acquired T.A. Field Holdings. The acquisition was made on acceptance of the offer by the Field Family, and was made subject to government approval.

In 1989 Pevensey Station on the Murrumbidgee was purchased, and was subsequently sold in 2012.

In 1997 Benangaroo was purchased and has been the family home since that time.

The company has evolved over many generations and is now one of Australia’s largest wool producers. It also holds substantial water rights in the Murrumbidgee and Murray Valleys and regularly trades this water. Large herds of Hereford/Angus cross cattle are run on Congi and Wyvern Stations. The steer portion are directly marketed to domestic feedlots or processing and easily meet the new Southern Baldy Maternal Index. Mobinbry at North Star was acquired in 2014 to give the family some diversification into dry land summer and winter cropping, and Aberfeldy was purchased in 2019 specifically for prime lamb production. All properties and enterprises are regularly benchmarked.

Over the years, T.A. Field Estates has been an advocate for young people entering the agricultural industry and is one of the few southern Australian agriculture businesses which has continued to employ jack/jillaroos. We continue to support this cause through creating employment opportunities and encouraging further education in Australian agriculture.

Through the Field family’s philanthropic foundation, there is a is proud longstanding support of several rural education initiatives, which T.A. Field Estates is involved with including the Country Education Foundation, Hay Inc, the Royal Agricultural Society of NSW Foundation (RASF) and the Peter Westblade Scholarship.

Wyvern Station has been held in the family since 1946. It is 50,000 hectares south-west of Griffith in the Riverina.

Aberfeldy was purchased in 2019 and is the southern-most property of T.A Field Estates, located 15km North of Holbrook NSW in the Greater Hume region. Soils are a mixture of alluvial creek flats and red loam through to undulating country with a 28” rainfall.

The 1,770 hectare property has about 9km of double frontage to the Billabong Creek and utilises its highly improved pastures and fodder crops to operate a composite ewe flock of 10,000 breeders as well as opportunistically trading lamb and cattle.

Aberfeldy is very well located, being close to Gundagai Meat Processors and Junee Abattoir, which supplies lamb to the domestic market. The property is watered from a frontage to the creek and 3 bores with a newly installed stock watering system. Aberfeldy also has direct access to the busy Hume Freeway.

Covers 3,000 hectares and has double frontage to the busy Hume Highway. The property has Murrumbidgee River frontage of approximately 9km and annually produces 420 bales of 17.5 micron wool. Between 400-500 hectares are cultivated annually in a pasture rotation basis where Wheat, Barley and Canola are grown. About 3,000 1st X lambs are turned off annually to local finishers. Trading cattle are run when market and seasonal conditions are favourable.

The property was purchased in 1997 and was part of the Osborne pastoral family. Benangaroo ranges from fertile alluvial Murrumbidgee flats rising to gently undulating country and into steeper hills. Soil types range from sandy loams to brown granite with some granite rock outcrops on the ridges.

Congi is a high rainfall grazing property producing ultrafine wool and prime beef. Covering over 10,000 hectares, it is dissected by the Oxley Highway and is the largest property in the Walcha district. It was originally purchased from the long established Nivison family. Congi is the largest fine wool producer in the country, with over 700 bales produced annually and a flock average of 15.5 micron.

The Congi flock uses the 7/15 index set up by Sheep Genetics Australia and Yalgoo. The flock is not mulesed and the property breeds its own rams with semen supplied from Yalgoo and Nerstane. Congi has recently achieved Responsible Wool Standard (RWS) accreditation and has put in place a direct supply relationship with the well-known Italian mill of Botto Giuseppe based in Biella, for their “slo wool” program.

The cattle breeding herd on Congi has a tight 6 week joining period and both Hereford and Angus bulls are used. About 1,300 breeding cows are run with the steer portion being finished at Doughboy Mountain. At weaning all calves are sent to Doughboy Mountain at Ebor.

The country consists of undulating country ranging in altitude from 850 metres to 1,170 metres.

The soil is granite, generally medium quality ranging to higher basalt peaks. There is about 1,500 hectares of improved pasture. The country runs to the north-east from its double 13km frontage to the McDonald River and with Congi and Tara Springs Creeks running through the property. An adjoining property, Milton Park was added in 2020 which covers a further 570 hectares.

Doughboy Mountain was purchased as a finishing block for calves, and with the construction of the exclusion fence, 1st X lambs from Congi. About 350 hectares of annual fodder crops are planted and the objective is to turn off the steers in 18-20 months of age at 260kg carcass weight marketed directly to meat processors. Doughboy Mountain also runs its own herd of approximately 400 Angus cows.

The dry land farming property was acquired in September 2014 from the McIntosh Family and is in the highly productive area of North Star, known as the heart of the Golden Triangle.

The property is about 6,200 hectares of which 4,750 hectares are annually cropped. Additionally, there is 900 hectares of leased farming country. Both dry land winter and summer cropping operations are able to be carried out.

The property consists of two distinct properties – Wilby and Mobinbry North. The main homestead is on Mobinbry, and sheds, grain complex with 10,000 tonne storage capacity and a further homestead on Wilby.

Wyvern Station has been held in the family since 1946. It is 50,000 hectares south-west of Griffith in the Riverina region.

It produces over 1,100 bales of medium wool averaging 17-19 micron. A new 12 stand woolshed and yards was completed in 2015, along with the newly constructed shearer’s quarters and arguably would be one of the best sheep operations and flocks in the country. The shearing is unique in that all the wool is handled in an unskirted manner, though overseen by a qualified wool classer. The bulk of the wool is pressed up into one or two main lines with no skirting taking place.

An annual on-property sheep sale is held every October and the sheep sold at this sale tend to bring a premium, as purchasers can be confident they are buying highly productive wool cutters.

Contract bred rams are supplied by Hazeldean, and the flock is classed by Craig Wilson. A herd of 550 breeding cows is run and the property has options with the steers it produces due to the proximity of four main feedlots: Jindalee, Prime City, Rockdale and Ladysmith. The bulk of the country is for livestock and wool production with a small area (110 ha) for irrigation which is leased out. Trading and agistment cattle are run in conjunction with the flock and herd when seasonal and market conditions permit.

As typical with Riverina properties the country has a balance of red and grey clay and occasional sandy ridges.

The country is flat with uniform fall towards the south west. The Murrumbidgee River forms a 20km southern boundary. 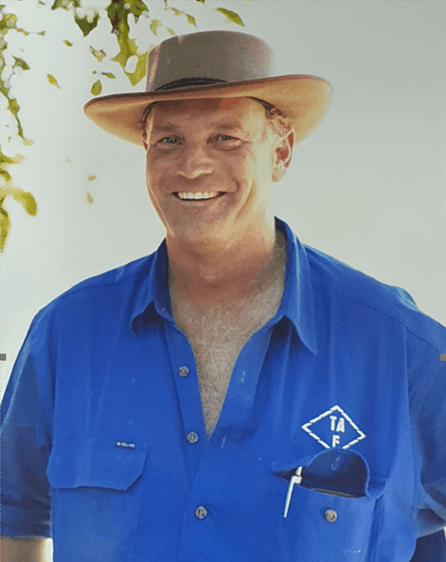 Managing Director and Chairman of T. A. Field Estates Pty Limited, the operating company for pastoral and agricultural pursuits. Principal activities are wool production, sheep and cattle breeding along with a large dry land cropping operation.